Although we might all know about the diversity in the Middle East, our knowledge of its colourful performing arts culture is limited. We know more about its anti-theatrical prejudices and political suppression of the performing arts than about its diverse performance traditions, multiplicity of theatrical practices and the credibility of its artists’ socio-political commitments. The journey offered by this exhibition is an attempt to share and celebrate the diversity and audacity of the dramatic arts created by artists of Arab, Persian, Turkish and many other ethnicities. 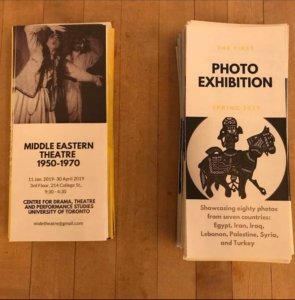 As a teacher and student from the Middle East (Iran), I am surprised by the lack of theatre artists of the region found in the undergrad and graduate curricula of drama and theatre programs in North America. Yet my extensive research shows that the region has vibrant and various theatrical visions and productions. Academically speaking, the exhibition is a diversifying intervention to enhance students’ active learning about the performing arts in the region.

The exhibition had four sections:

As the first of its kind in North America, the exhibition was admired by theatre historians and scholars (Richard Schechner, Frank Hildy, Stephen Johnson, and Don Rubin) and my curatorial journey of collecting and exhibiting this rare collection enabled me to tie my playful approach to research with my worldmindedness vision. The collection constitutes the core corpus of my future digital curation project.